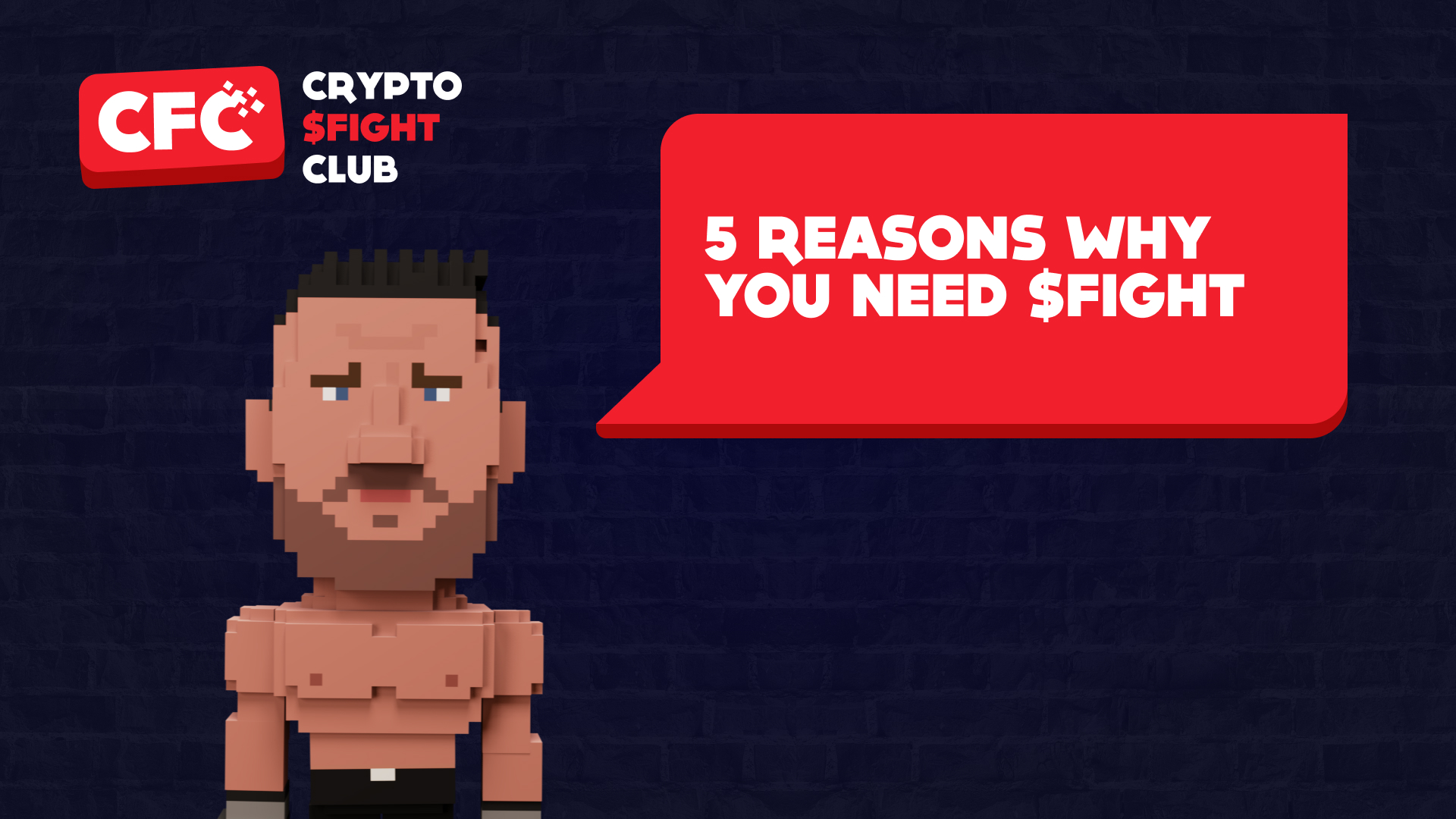 5 Reasons Why You Need $FIGHT

The $FIGHT is on! Explore the many uses and functions of the native token for Crypto Fight Club right here as we unpack exactly what it means to be a holder of $FIGHT.

Merge strategy in gameplay with economic value and you get a game encompassing the finest aspects of play to earn and blockchain.

Use the $FIGHT token to unlock a world of gaming and rewards on Crypto Fight Club.

Enter the ring and participate in a thriving game economy experienced through your NFT fighter.

From NFT wearables to staking and the unrivalled thrill of entering into PvP and championships, join a world where you can customize, battle and play your way to victory and rewards of $FIGHT tokens for almost every action you make.

Unleash the potential of your fighter by boosting its stats through staking and the use of wearables. Unlock the ultimate gaming experience with truly valuable NFTs and a transparent, robust economy.

Read on for 5 reasons you need $FIGHT:

Central to the game economics is the use of $FIGHT to to buy upgrades and wearables for an NFT fighter. You obtain a BEP-721 fighter by burning 2,000 $FIGHT to a black hole contract address (to be taken out of circulation) to then open a mystery box.

What this means is the currency benefits from increased scarcity while rewarding the user with an NFT fighter, with a world of options to customize and enhance the stats of this fighter. The base stats depend upon the rarity of the fighter but there are ways to improve upon this.

$FIGHT can further be used to trade NFTs on the marketplace as players seek to either acquire valuable fighters, wearables and cosmetic items or sell what they have for a profit.

You can also stake for a period between one day and five years with longer and bigger stakes offering exponentially larger rewards. 1% of total supply is allocated as a yearly inflation rate to create a pool of 10 million $FIGHT tokens to be distributed among all stakers.

All NFT sales take place on the Crypto Fight Club platform and are transferred directly into your wallet to which only the owner holds the keys. This is crucial for true ownership to take place.

Mystery boxes are the only way to acquire an NFT fighter and cost 2,000 $FIGHT to open. This gives you a fighter at random with varying levels of rarity which correspond to its stats of attack, defense and technique.

We will announce at a later date how you can get your hands on wearables to boost your NFT fighter in the ring.

NFTs can be traded on the marketplace so fear not if you come in late and miss the first round of mystery box sales and first wave of new wearables.

On Crypto Fight Club you stake inside of your NFT fighter and lock tokens for a period between one day and five years.

In practice this means 80% (8 million) go to those who stake liquidity provider (LP) $FIGHT and 20% (2 million) are divvied out to stakers of $FIGHT.

Find out more about staking LP $FIGHT at our previous blog post here.

Once you have an NFT fighter, multiple avenues of earning more $FIGHT open up as it is the vehicle through which players experience the game in its entirety.

Alongside PvP are Championships where players pit their fighters against others over many rounds. You can wager in a one-off PvP encounter or spend $FIGHT to enter into a Championship to make an attempt at winning the total prize pool made up of entry fees.

Mini-games are a way to earn $FIGHT without spending anything. Ranking in the top 10 on the daily leaderboard earns players tokens and a global lifetime leaderboard for a single NFT also confers rewards.

These features require the investment of 2,000 $FIGHT to acquire the NFT fighter, but pay dividends in the long run.

In the future, an expanded metaverse across not just Crypto Fight Club, but also different gaming platforms, will allow you to play to earn with your fighter on a greater scale. Think big with your NFT fighter, and imagine a world where you can cross borders and participate in your favourite games all while earning tokens as you play.

Soon we will announce the various ways our community can vote on the future of Crypto Fight Club and determine the fate of the game. A crucial tenet of the platform is its ability to be crafted by the players, for the players.

Holding and spending $FIGHT is inherently democratic and user-driven: Crypto Fight Club will never buy back or burn tokens.

Stay tuned for updates on how community voting will change the face of CFC.

Another aspect is the vesting model which ensures tokens are released to the team and developers at such a gradual rate there will never be any chance of a mass sell-off.

The $FIGHT is on! Join us today: