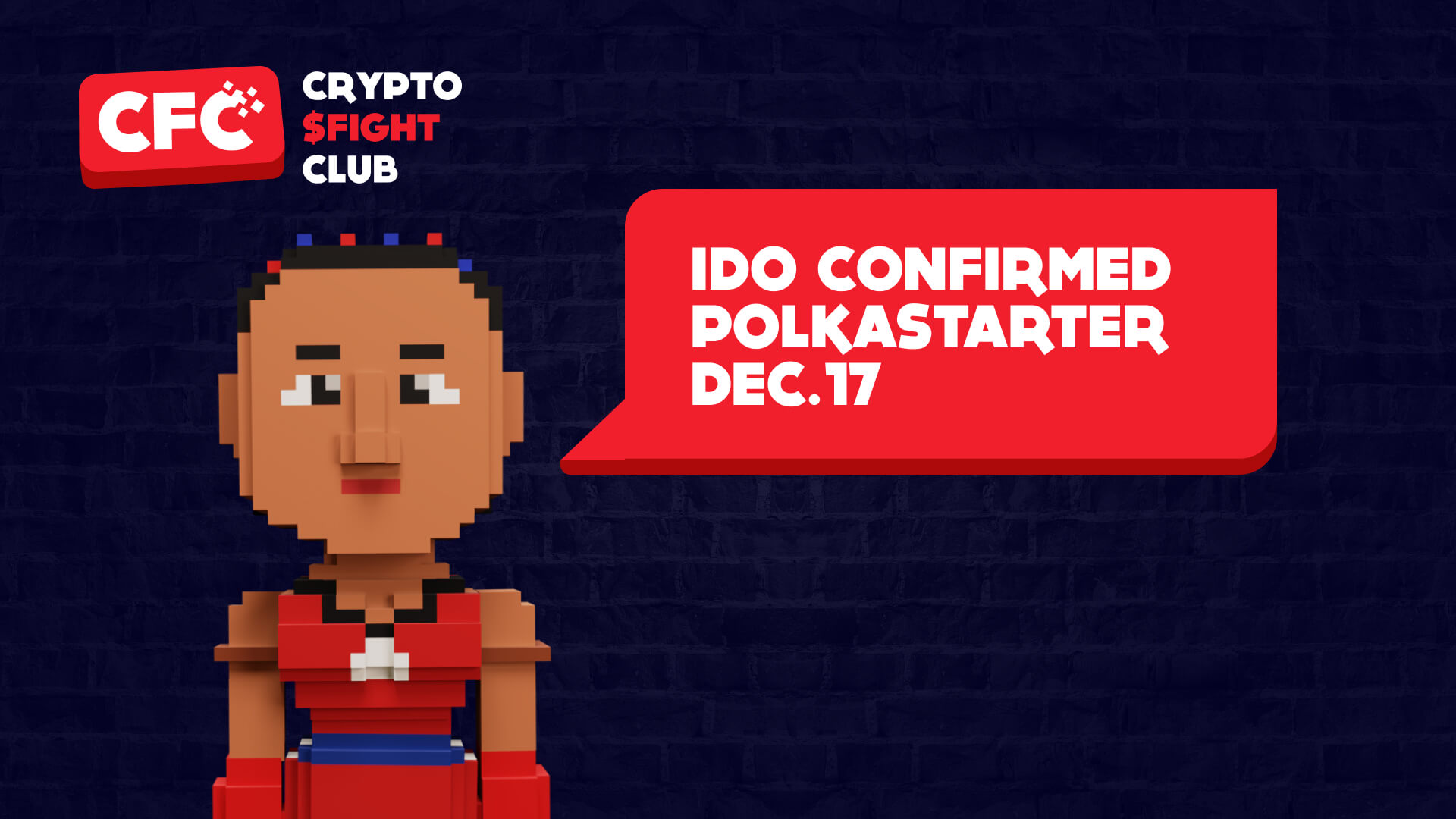 Crypto Fight Club is stoked to announce their IDO on…

The age of the IDO and IGO are both excellent ways to bring more exposure to a project but also to acquire a quality user base. With great pleasure, we’d like to officially announce our official second IDO platform with the biggest name in the industry: Polkastarter.

Polkastarter’s support throughout the last couple of weeks have been essential to the Crypto Fight Club business model. Should we have gone a different direction, the foreseeable engagement and hype would simply not be the same.

The IDO for $FIGHT on Polkastarter will take place on…

Let’s take a brief dive into Crypto Fight Club, for those who don’t know who we are.

Key features of Crypto Fight Club (CFC) include (not limited to):

With the array of options for players from all walks of life, Crypto Fight Club offers something for everyone. If you’re not big into gaming — back a fighter in a tournament. Not into centralized counter-party risk? This staking model is right up your alley. The goal is to find room for anyone inside and outside of crypto with unique network effects that garner the best experience possible.

Crypto Fight Club has finalized its seed round of $2.775m and will be finalizing the fundraising endeavours with a remaining $600k for the public sale. The team came together and realized Polkastarter was the best partner for the job. We are honored to call them official partners and have them in our corner.

You can learn more about Crypto Fight Club on Polkastarter HERE.

Stay tuned for more details as we will be releasing another post with information about the sale date and the instructions for how to whitelist prior to IDO.

Polkastarter is the fully decentralized protocol for launching new ideas. Our curation process and industry access enable us to offer the best new projects in blockchain and digital assets.

With Polkastarter, decentralized projects can raise awareness, build a loyal community, and receive long-term support. Users of the platform will be able to participate in a secure and compliant environment and use assets both in and beyond the current ERC20 standard.

Crypto Fight Club (CFC) is a new and innovative NFT-enabled game that allows players to properly stake, battle opposing fighters, and even compete in championship events for real rewards. Similarly to popular turn-based games in the 1990s, like Pokémon or Final Fantasy, Crypto Fight Club is reimagining the industry with multiple play2earn functions while players are also entitled to the true ownership of their in-game players through NFTs. CFC is powered by its own native BEP-20 token, $FIGHT on Binance Smart Chain (BSC), which comes with an array of uses inside and outside of the game.

In-game characters are represented by the BEP-721 standard. CFC allows these playable characters to stake the native currency or the LP version of $FIGHT inside of the NFT prizefighters. NFT holders can also participate in a series of events such as mini-games, trivia, free-roam PvE, and of course, hash it out in the ring to earn even more tokens and acquire more powerful fighters. Through training and staking, fighters can enhance their stats through staking and equipping wearable BEP-1155 NFTs such as gloves, shorts, belts etc.

To further the uniqueness, CFC blends both GameFi and DeFi together as one. First, in order to acquire one of the NFT fighters, the future user must burn 2,000 $FIGHT tokens to mint their fighter from a mystery pack. With the inflationary model intact, active stakers holding $FIGHT inside of the NFT will not only accrue interest in the tokens over time, but also enhance that particular fighter’s stats at a rate of 20% per year, also granting an initial bonus in $FIGHT as well. This is called longer pays better, as those who stake longer are rewarded based on delayed gratification.

Be sure to follow us on our official Crypto Fight Club channels for the latest information and updates.