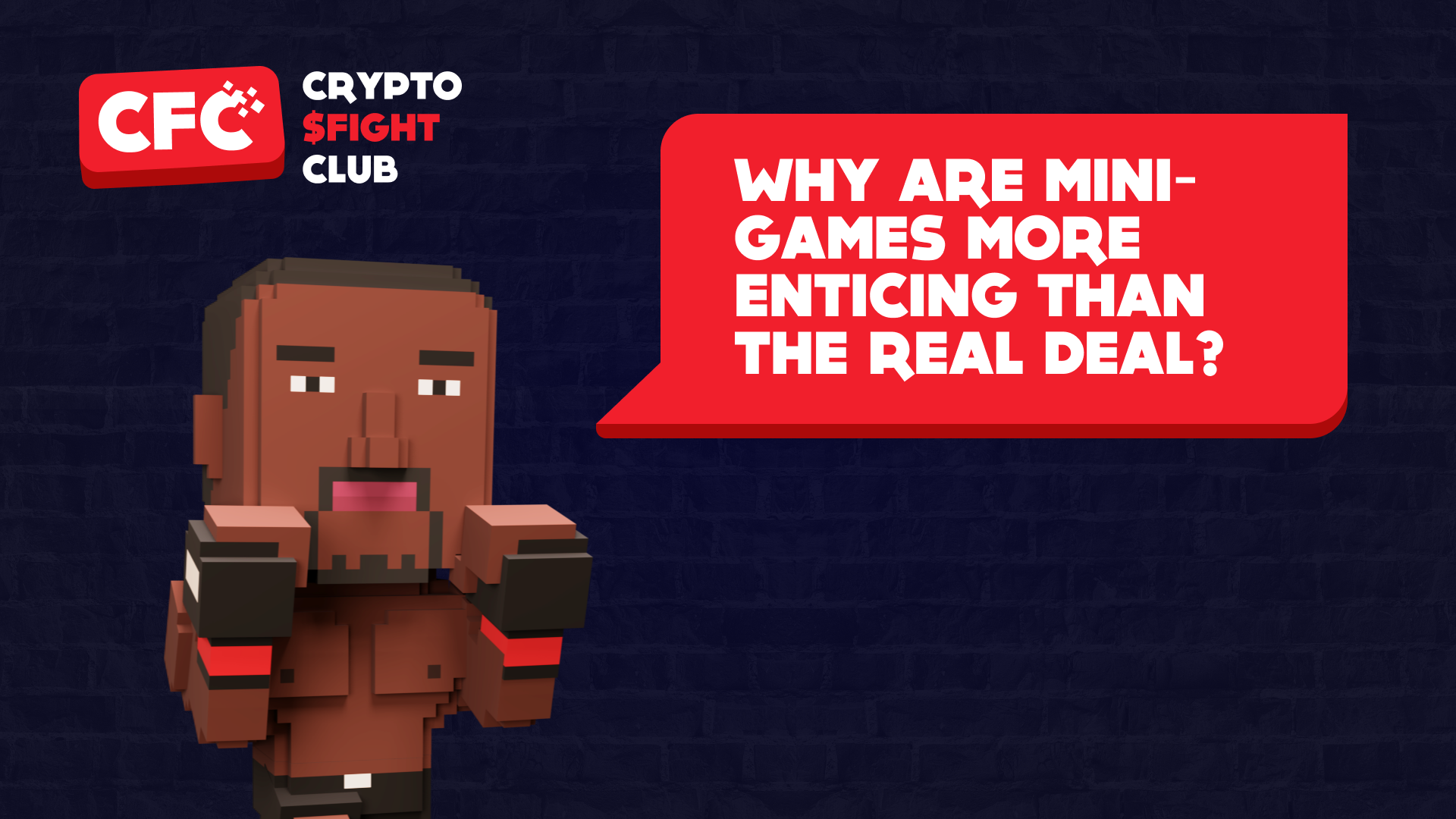 Why are Mini-Games More Enticing Than the Real Deal?

All gaming experience matters to Crypto Fight Club, but the key to unlocking a great time is the variety of game modes available. Being able to pick up a game and jump into an epic experience whenever you want is an important aspect of our multi-tiered video game.

Once obtaining an NFT Fighter Avatar, players will engage in a series of #play2earn mini-games directly on the Crypto Fight Club website. Various trials and tribulations will be unveiled as we prepare the fighter for an enriched PvP and PvE Crypto Game. Enter the beginnings of a CFC metaverse!

Let’s unpack how our games aim to attract players who will enjoy the power punch play time and time again.

There is a huge attraction for a fast-paced mini-game which you can play during any lull you have during the day where you find yourself with a few spare minutes. In modern life we are more connected than ever and spare time is precious.

Maximizing our time with enjoyment and investment is a no-brainer. So the prospect of relatively little time spent on a growing investment and tangible rewards is a winning plan.

Two minutes — that’s all you need to play. Rewarding those who master the game and beat out other players to win the native $FIGHT Tokens. For those with a competitive streak, even greater rewards are unlocked. Gamers who consider themselves hot shots can try their luck to keep an extended leaderboard position and win unique prizes.

We all crave the dopamine hit after a win: many popular multiplayer games lead you down 90 minute duels where at the end you lose and are forced to consider the time wasted. If you taste the sweet nectar of victory it’s great, but a loss can suck the joy out of the game.

With a slightly stretched-out PvP game mode, Crypto Fight Club offers you the choice to play an extended matchup against other players in a battle of strategy.

The mini-games provide another avenue to get your gaming fix and earn tokens in the process. In the event of a loss, you have only lost two minutes of your time. A triumph gives you just what you’re looking for in a game: the feeling of success mixed with a crypto prize at the end.‍

Online mini-games carry with them a metagame which describes the act of strategizing and experimenting with different ways of playing to find a winning technique.

Players learn by doing and there is no single correct way to play. Paradoxically, the team developing a game don’t always know the best strategies and gamers are instead the harbingers of innovation in building an idea of how to play a game.

An alpha version may reveal bugs and imbalances, as total playtime racks up with players spending significant time inside the game, but this is part of the natural evolution of the game.

Those who rise to the top will be the most persistent and creative learners, who dissect a game’s mechanics and quickly work out a winning strategy.

The metagame often sees an exchange of ideas as players decide for themselves how to play. Success is thereafter bred from the widespread experimentation this results in.